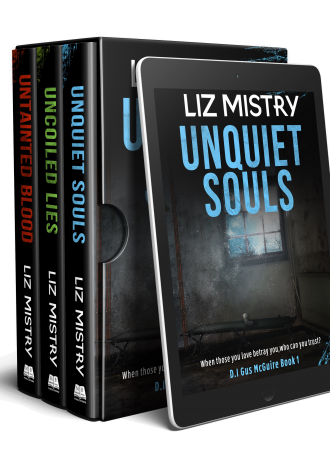 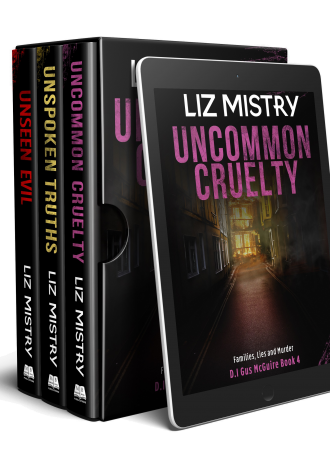 Uncommon Cruelty Book 4
DI Gus McGuire and his team are called in to investigate the disappearance of a teenage boy after his parents return from a weekend away, to find their home trashed and their son missing. But that is just the beginning.
As the investigation unfolds, Gus must discover what links a violent bikers’ gang, a Muslim youth group and a fundamentalist American based Christian church.
Alongside this, two cases from the past come back to haunt DI Gus McGuire and his DS, Alice Cooper.
Gus has a lot to juggle, but will he cope?
Unspoken Truths, Book 5
DI Gus McGuire and his team navigate a complex web of intrigue, espionage, and murder. In Bradford, Manchester and on Saddleworth Moor, Gus will be pushed to his physical and psychological limits.
First, a train between Manchester and Bradford is deliberately derailed by a vehicle carrying drugs, then a woman’s tortured body is discovered in Keighley. But when Gus’ brother-in-law goes missing, the investigation becomes personal.
As he battles against the storms of the Beast from the East, Gus must uncover the links between the crimes as well as the reason behind the disappearance of his brother in law. With the body count increasing, Gus sets his team loose on the Dark Web but how will Gus react when he discovers that things are not as they seem?
Meanwhile, DS Alice Cooper faces extreme danger in prison and, as the evidence mounts against her, Gus and his team’s loyalties are pushed to the limit.
Can Gus stop the blueprint for a deadly bioweapon from falling into the wrong hands? Can he solve a series of murders and track down a psychotic killer?
Never before has Gus faced a test as demanding as this….
Unseen Evil, Book 6
Social Media can be the death of you …
The Snapchat
A twisted killer comes to the attention of DI Gus McGuire and his team when a teenager receives a Snapchat image of his murdered friend.
The Killer
As the killer becomes bolder, using social media to publicise the murders, Gus fears there may be more than one murderer targeting young people.
The Stalker
Meanwhile, Gus comes under threat from a stalker who is not afraid to get up close and personal.
Can Gus protect his loved ones and catch the killer before another Snap is received?