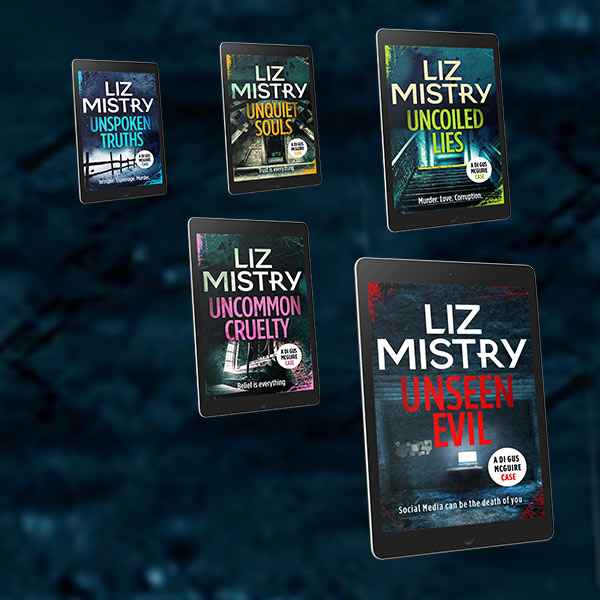 During the writing of each of my books, certain themes evolve. These are all contemporary, social issues which concern me personally. However, there is one recurring theme that I visit again and again … the impact of Mental health on my characters. But, I’ll get to that one later.

In Unquiet Souls, the theme of TRUST was explored time and again; trust between partners, a mother and child, colleagues, friends, the public and the authorities and ultimately the effects on my characters of broken trust. The topic of child trafficking in this book made it difficult to write, but I was determined to highlight these issues. The idea of adult’s betraying children’s trust in such an abhorrent way mustn’t be shied away from. In saying that, I took great pains to try to deal with the issue sensitively.

In Uncoiled Lies, BETRAYAL and LIES played a huge part and again my characters were forced to address and cope with the effects of betrayal and lies by different people; family members, lovers, friends and protectors. Uncoiled Lies, look s at families and the relationship between communities and how they develop. It also highlights the fact that women are often victimised by misogynists. I don’t like to brush things under the carpet!

In Untainted Blood COMMUNITY and RACISM were the recurring themes. Untainted Blood explores how Bradford’s diverse communities deal with challenges to their status quo. How underlying prejudices can easily come to the forefront and how communities address this.

This is a subject that I feel passionate about. Gus McGuire, my main character suffers from Post-Traumatic Stress Syndrome after being forced to kill his best friend (before Unquiet Souls opens). However, it is not the label that is important for Gus, it is the effect his Mental Health has on his life. Throughout the series, Gus’ mental health has fluctuated. Sometimes he copes better than at others. He uses jogging and work to manage his condition and has developed strategies to cope with the side effects he suffers. His family and his wee dog, Bingo are integral to maintaining positive mental health. I have shown his condition at its worst, with night sweats, panic attacks and insomnia. I have demonstrated his mood swings and his need to address his anger. I have referred to his counselling and medication.

However, Gus’ symptoms are not the only symptoms of poor mental health out there and his condition is not the only one we need to be aware of. No one size fits all! Mental health issues are varied and present in diverse ways.

In Uncommon Cruelty, Gus starts off in a slightly better place than he has been for a long time. However, by the end of the book circumstances conspire to send him on a downward spiral, as he faces his most challenging period ever.

Alongside Gus’ personal struggles, the theme of teen mental health is evident again. With an array of teen characters, from Mo’s daughter Zarqa, who is struggling with ‘family issues’ to a young gay girl, traumatised by her past and forced by the rigid doctrines of the religious group her family are part of to deny her sexuality.

Uncommon Cruelty looks at identity in various ways and religious identity is one of the ways. An unorthodox Christian ‘cultish’ type group, operating outside the umbrella of the Church of England provides an identity for its followers. However, what happens when your personal identity clashes with the doctrines of the group?

The theme of identity is echoed in a young Muslim group based in a local Mosque. This group of teens are desperate to navigate through their lives by participating in the Western Society in which they were born, whilst also adhering to expected practises of their faith.

Sexual identity for teens is also explored as is the sexualisation of young women and how easily they can be, and often are, exploited. In my writing, I always try to highlight issues that are relevant to society and the misogynistic abuse of vulnerable girls outrages me.

Gus himself comes from a functional, nuclear family, however, with Scottish parents, one of whom is mixed race Jamaican/Scottish, he has suffered prejudice growing up in Bradford. Alice Cooper is an only child, with rather eccentric scientist parents. DC Sampson is the only boy in a huge Irish family and DC Taffy Bhandir comes from a traditional Sikh family. Compo’s family hasn’t come into play yet – Watch this space!

So, let me introduce you to some of the other families you’ll meet in Uncommon Cruelty.

First up, we have a very functional step-sister and brother family. The brother is autistic and he and his sister live together in a deprived working-class area of Bradford. The brother is Asian and the sister is an indigenous white Bradfordian.

We also have two single parent families. The first is a white widower father bringing up two teenagers in inner city Bradford; hard working, law abiding and trying to do his best. Then we have a Muslim mum, first generation British, bringing up her two children on her own as her husband is in prison. She has divorced her husband and wants her kids to benefit from a University education. Lastly, we have some seemingly ‘functional’ families who are, in fact, carrying huge and very destructive secrets which could make their families implode.