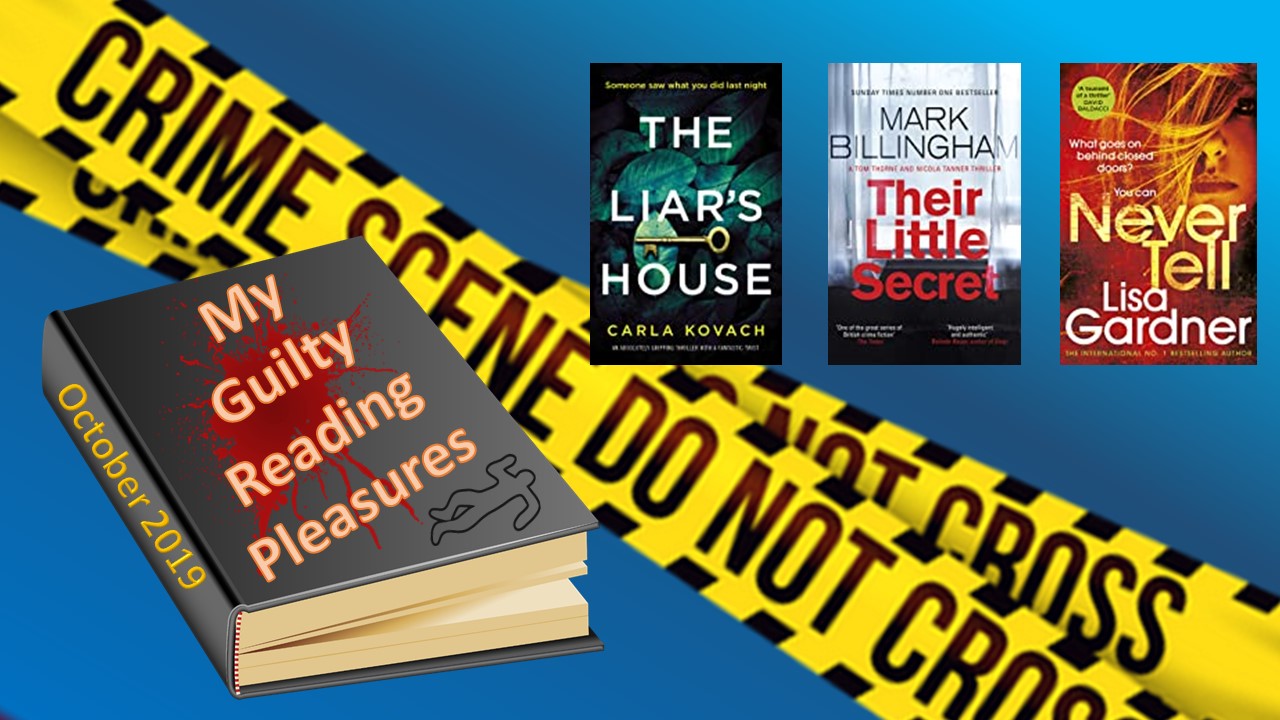 Did a lot of reading last month and as usual found it difficult to chose my three favourites. I did a bit of a binge read of Carla Kovach’s Gina Harte series, so that was a no brainer. Mark Billingham’s Their Little Secret was intriguing and had a slightly different feel from his usual Thorne thrillers. Lisa Garner’s Never Tell was twisty as hell. And, once more, without intending to , My Guilty Pleasure’s Selection have a common theme: Secret’s and Lies – Deliciously villainous.

The Liar’s House by Carla Kovach

This is only the second DCI Gina Harte book that I’ve read and already I’m becoming addicted. The Liar’s House takes us into the world of partner swapping, male domination and, of course murder. Unfortunately, for Gina, this case is a little too close to home for her and this affects her emotionally and physically. Kovach has a lovely way of blending her storylines and offering a cast of characters that leaves you suspecting one of them after the other. I love the way a cold case ficts into the current investigation. I love her personal dynamics betwee her and her team and the way we keep being fed little snippets of Harte’s backstory. This entire novel was based around secrets and lies and it made it a juicy read. I’ve now moved straight onto an ARC of Carla’s newest book, Her Dark Heart which is available for pre order here

Their Little Secret by Mark Billingham

I love a good serial killer novel and this is great. It starts with a suicide by a woman who has been targeted by a fraudster who etorts all her money. Tom Thorne gets the bit between his teeth on this one as he considers the unknown fraudster to beguilty of murder and is determined to find him. Now, this is where it becomes deliciously creepy. Sarah, a woman with a huge secret of her own is on the look out for thrills and when their lives collide it becomes truly explosive. The dynamics between Sarah and her new love interest are complex, appalling and yet strangely intriguing and , of course it leads to murder. This isn’t so much a ‘whodunnit’ as a ‘whydunnit’ as Billingham leads us through the investigation to bring the two to justice. Watch out for an explosive ending as the lies just keep on getting better and better.

This is the first D.D. Warren novel I have read and it won’t be the last! A secret from her teen years comes back to haunt pregnant Evie when she returns home one evening to find her husband shot dead in his office. The thing is, this isn’t the first time a close relative of Evie’s has been shot dead at home, so understandably the police suspect Evie. The novel sees D.D Warren try to decipher the lies that Evie is telling and meanwhile Evie is convinced that her dead husband has been up to no good. In this story there are lies, and subterfuge at every turn and when the ending hits, it hits with a vengeance. I really enjoyed Flora’s storline. As a survivor of the most traumatic experience, Flora’s character is exciting, flawed and really gets you rooting for her. Loved this book!