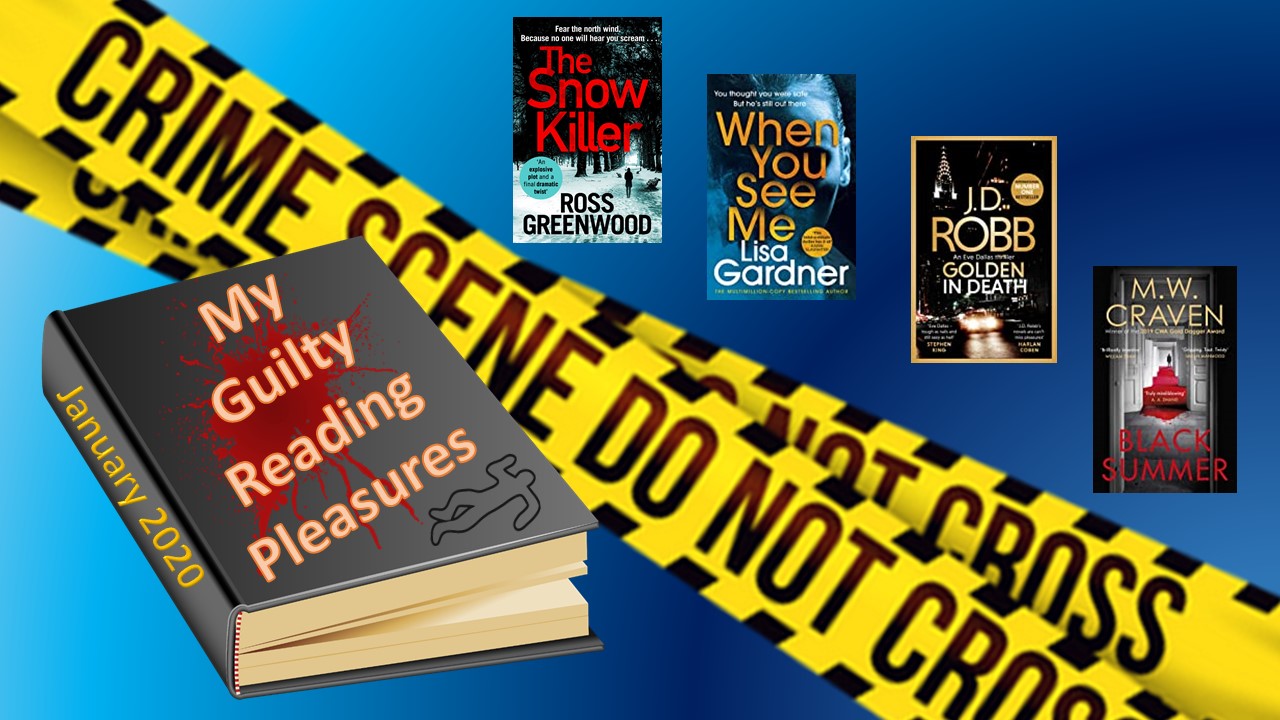 This is the first My Guilty Reading Pleasures of the year and I’m excited to share the books I’ve most enjoyed reading this month. Here they are:

I just love the Washington Poe and Tilly Bradshaw series. This is the second in the series and is every bit as good as the first, if not better. Poe and Tilly are faced with an impossible task when Poe is forced to wonder if he made a mistake earlier in his career when the ghost of a person he thought was dead comes back to prove him wrong.

Poe and Tilly as a partnership work so well together. Their interactions really make this series for me and I really can’t wait for Poe and Bradshaw Book 3 to be released

In the past I’ve read Ross Greenwood’s books and been utterly thrilled. This foray into the world of the police procedural has been a success. His pithy writing and his ability to get right into the heart of his characters make this book unputdownable. From the gripping first chapter to the end, I was kept gripped. The Snow Killer is a story of revenge that spans over fifty years. I found it intriguing that a revenge killer could wait so long for their revenge and found myself trying to link the pieces together. Greenwood succeeds in creating a cold winter tale with all the elements of a great narrative: suspense, great characters, gritty realism and a real grip of what’s going on in society now. Loved it.

My Guilty Pleasures Number 3: When You See Me by Lisa Gardner

When You See Me once more brings Detective D.D. Warren and FBI Special Agent Kimberley Quincy together with Flora Dane. With three strong women at the helm, this book is action packed, poignant and thrilling. Flora Dane’s experience at the hands of serial kidnapper Jacob Ness is once more the focus of this story. Gardner skillfully takes Dane on even more of a journey of self discovery when a body discovered in the Deep South may have links with her tormentor. The town the body is discovered in has its own secrets and the threats are very real when the trio start to investigate. Thrilling and exciting with kick ass characters. Just the thing to curl up with on a January evening.

My Guilty Pleasures Number 4: Golden In Death by J.D. Robb

Due for release on 6th Feb, I was absolutely blown away by this book. This is the 5oth – I repeat – 50th book in the Eve Dallas/Roarke series and I have read everyone. However, what impressed me the most about this is that somehow, even after such a long running series, Robb keeps Roarke and Eve fresh for the reader.

This one is all about revenge and love and family and it’s a tearjerker … but rest assured Dallas and her sidekick Peabody get their killer in the end. It never ceases to amaze me how easily I become invested in Robb’s strorylines – police procedurals set in a New York of the future – it’s great. I love the dynamics between Eve and her team. I love the shades of light and dark with which Eve is painted. I love the kick ass woman she is and how she’s overcome her traumas. Here’s to the next 50 of the In Death series.