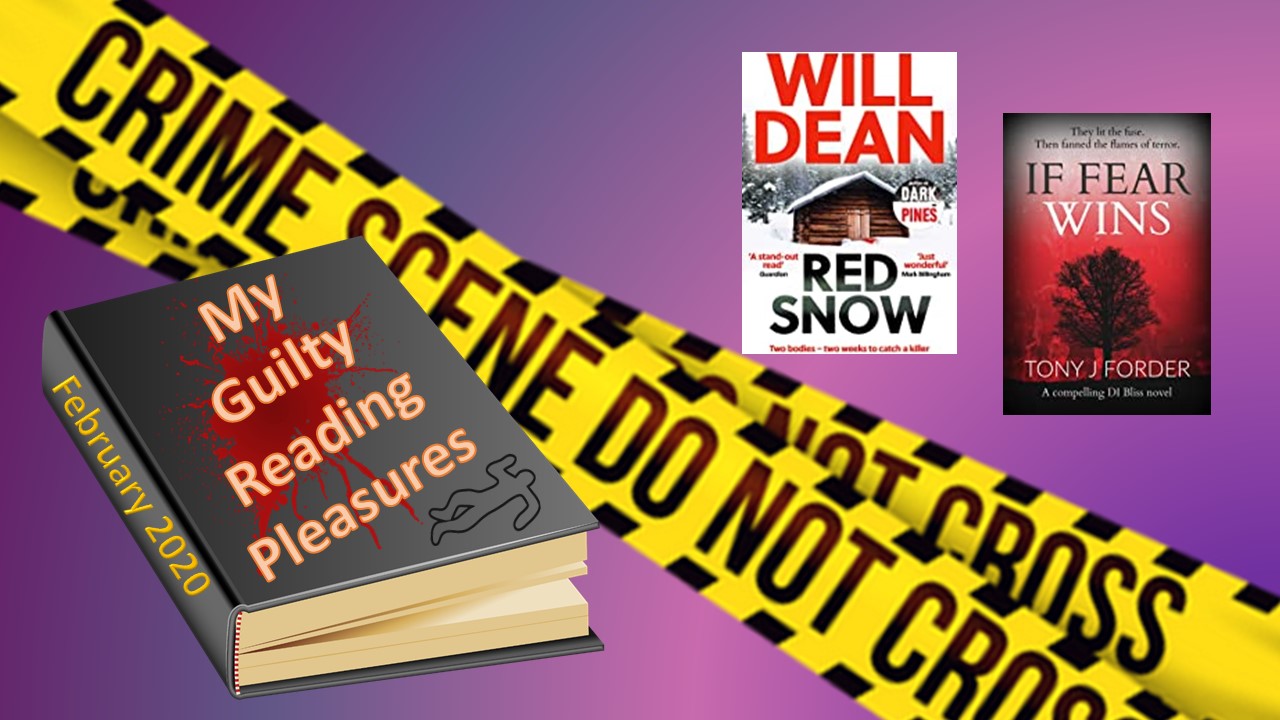 This is the first My Guilty Reading Pleasures of the year and I’m excited to share the books I’ve most enjoyed reading in February. Quite by accident rather than design , the two books I’ve chosen as my best reads this month both have a main character with a disability – which is something you rarely see in crime fiction. The first is Will Dean’s Tuva Moodyson, who became deaf after having childhood Meningitis and the second is Tony Forder’s DI Bliss who has Menieres disease (to find out more about Menieres here’s a link to an article Tony, who himself copes with Menieres disease, has posted on his website. https://www.tonyjforder.com/post/2019/06/13/spin-cycle-part-one

I have to admit that I am late to the show with Will Deans books and I blame an ever increasing TBR pile. However when I read Dark Pines I was immedietly transported to a closed rural, Swedish community – and I loved it. I immediately moved onto Red Snow which focuses on the town of Gavrik’s main source of employment, The Grimberg Liquorice Factory and its eccentric owners and workers.

Tuva Moodyson, the main journalist for the local newspaper witnesses the owner of the factory jumping from one of their tall chimneys and from there many strange and some deadly things begin to happen around the factory, which of course Tuva just has to investigate.

What I loved most about Red Snow was the way Dean paints his characters. Each one is an individual, but Tuva is my favourite and the reason I love her so much is that she is so full of curiosity, so vibrant and yet so very very human.. She is plagued by certain events in her past and she is fiercely independant. Her deafness lreally made me think about how I take for granted the sounds around me. I loved the way that Tuva had a constant battle with her hearing aids – not vbecause she so desperately wanted to hear, but because , on occasion her job necessitated that she could. I loved the way Dean described how free Tuva felt when she took her aids out and was cocooned in silence – it was like her safe place.

There was another character I loved and that was the weather. Dean encapsulated a small communiity battling a murderer, but also constantly having to battle and work round the relentless freezing weather conditions. This escalated the tension for me and Dean, I felt really promoted the bleak weather to character number two.

Red Snow is an absolutely fantastic read and I cannot recommend it enough.

Again, I’m a bit of a late comer to the DI Bliss series, but I’m sure as hell making up for it now. If Fear Wins is the third of the DI Bliss series and it’s a cracker involving the Spooks, Counter- Terrorism and of course Bliss and Chandler.

If Fear Wins reunites Bliss with someone from his past and, as usual, the acerbic Bliss, skips around the edges of protocol, putting himself at risk both physically and mentally, in order to do the right thing. What starts out as a possible (and very gruesome) terrorist attack, soon becomees something else as the web of clues tangle and interweave. in a multi faceted police procedural that gave my heart a much needed workout.

So, what makes me devour these Bliss books? Well, there are many things. I love the dynamics between Penny Chandler and Bliss. She is a worthy foil to his sardonic wit and gives as good as she gets – I love that. I also love the fact that, in Bliss, we see a hero who doesn’t conform to all the usual stereotypes of a crime fiction hero. He’s in his fifties, he has had to adapt his life to manage his Menieres diagnosis and he’s a straight talking, slightly difficult to get on with at times, detective. In other words he’s real.

But, more than that, he’s what many of us aspire to – a hero who refuses to let the bad guys win regardless of the personal cost. He’s tenacious, intelligent and yet vulnerable and flawed.

I’m catching up on the rest of the Bliss series, but I believe (at time of writing) If Fear Wins is on sale for only 99p – My recommendation ? Go get the damn thing before the price shoots up again.