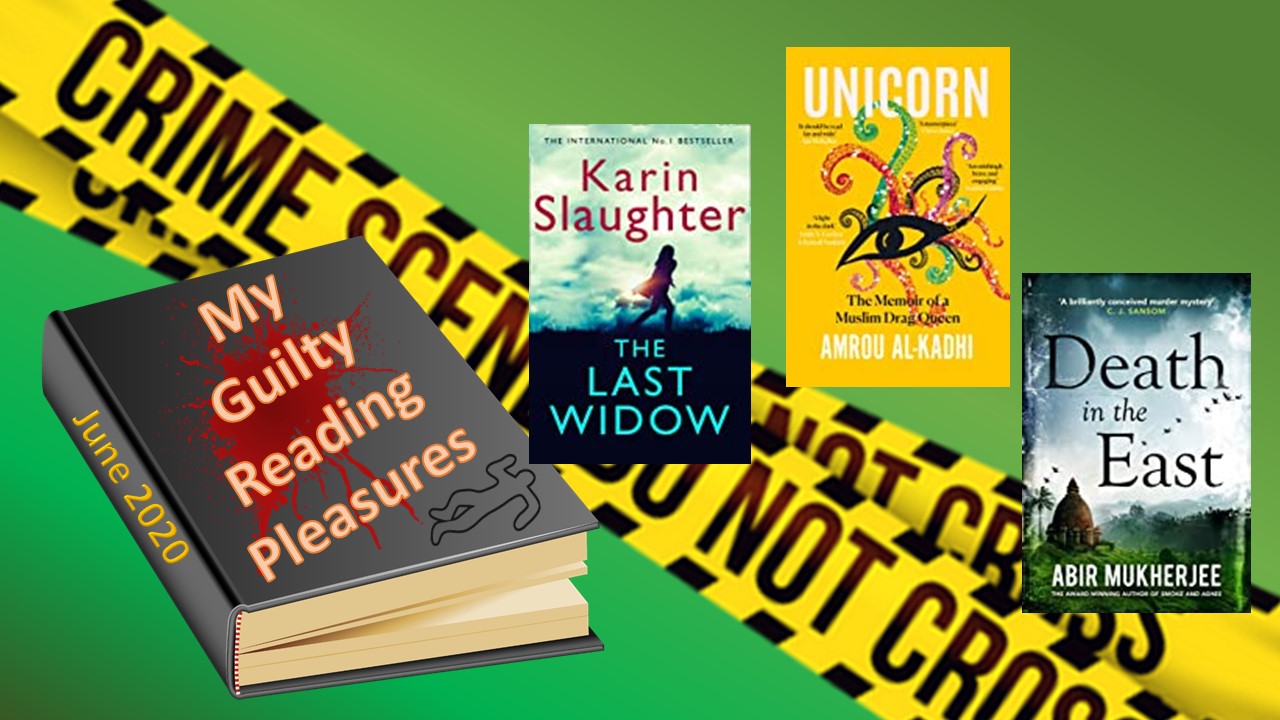 I’ve been spoiled for choice this month with really great books. I don’t know if it’s the climate in terms of Covid, but my reading mojo has increased and again this month, I’ve chosen an eclectic selection of books. Whilst I love reading crime fiction, I’ve decided to also make sure I expand my reading material by reading around subjects that interest me. So, this months choices are: Karin Slaughter’s contemporary US thriller,The Last Widow, Abir Mukherjees, brilliant crime thriller set in colonial India, Death in the East and Amrou Al-Kadhi’s topical book Unicorn: The Memoir of a Muslim Drag Queen

The relationship between Will and Sara is sharper, more poignant and infinately more compulsive than before – a which is soooo satisfying. When Sar is snatched by an extremist right wong group who have a complex and deadly agenda that will result in mass deaths, Sara needs al of her ingenuity to survive. Meanwhile, Will’s worse nightmare has become a realisty and despite serious injury, he is determined to bring Sara home. The range of characters is fascinating and Slaughter comes into her own in makig each so very indivdual from the acerbic Amand to the lotyal yet feisty Faith who juggles motherhood with her job, and from Sara’s overprotective mum to her loyal, effusive sister. As for the bad guys … well they are a real varied stomach-churning myriad of badness. From the too smooth, too perfect Dash to the raw, visceral cruelty of his colleagues, to the blind followers too niave to realise they are being played. Fast paced, nuanced, and threatening, The Last Widow is shocking in parts, unfortuinatley very believable and the truth this stroy shows is particularly poignant in the current climate. An Easy 5* from me.

Guilty Pleasure 2: Death in the East by Abir Mukherjee

I don’t read a lot of historic crime fiction, but was seduced into reading this series by hearing Abir talk so eloquently at various events and also because he’s a fellow Scot. Now, I’m an avid fan of Wyndham and Bannerjee. I love the sense of heat and oppression and passion and flaws that run through Mukherjee’s books and he does this again in Death in the East. The sense of place is almost tangible and for me that backdrop of India really adds to the narrative. I love series that slowly reveal bits about the main characters over the course of a few books and that was one aspect of Death in The East that I particularly enjoyed. The two timelines gave sneaky peeks into what has helped to make Wyndham into the character he is today (or rather in 1920s India). Bannerjee also becomes more visible in this novel. We learn more about his character and his background and in Death in the East he seems to come into his own – becomes more confident , much more established. I have to say I enjoy the dynamics beteween these two detectives and think their relationship lends authenticity to the history of the British Raj in India. Loved, it loved it, loved it …. Oh, did I tell you I loved it?

Guilty Pleasure 3: Unicorn by Amrou Al-Kadhi The Memoir of a Muslim Drag Queen

This book is a must read. It made me cry, it made me rage, it made me laugh. A brave an honest book that doesn’t shy away from the difficulties of being Muslim, gay and a drag queen. It is powerful and, I think empowering. Al Khadi has a knack of the one liner, the pithy, visceral responses and the ability to look inwards as well as outwards. I don’t read autobiographies as a rule, but was tempted by this becuse I write about a gay Muslim chracter who is a police officer and two of my children are gay. I’m so glad I read this. It was uplifting and really made me think. It celebrates difference in a beautifully honest way with heartbreaking parts yet so many redeeming parts too. It’s a story of love and discovery as well as being an emotional journey. Will treasure the memories of this book and it will be one I dip into again and again.